After a narrow 4-3 loss against Washington-Liberty High School in last year’s Capital Scholastic Hockey League championship game, the team is eager to prove it can go all the way this season.

“I think we’re right up there with the top three or four teams in the league, so we have a really good chance. I think we’re in a good place this year,” Coach Mike Grainger said.

“It was pretty rough, but we just gotta learn off that and just improve this season,” Owen Grainger, a defensive player and Coach Grainger’s son, said.

Within a few short years, T.C. Williams’ ice hockey team has cemented itself as a force to be reckoned with in the CSHL. Although the team was unable to secure the championship last year, the team began the season with a nine-game winning streak, ending the season 11-3 overall and getting ranked seventh in the DMV area by The Washington Post. 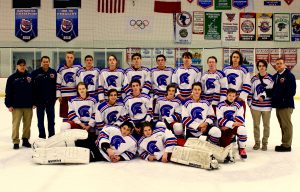 The Titans lost six players to graduation at the end of last season, but the team has a healthy class of seniors and juniors this year, Owen Grainger said. Three of the top 15 regular season scorers from last year are still on the team: Owen Grainger, Aidan Thorp-O’Brien and 2018-2019 CSHL Player of the Year Jason Townsend.

“We do have players that can score at any moment, so putting the puck in the net is not our problem,” Mike Grainger said.

With Owen Grainger, the only tier one club player on the varsity team, on defense and goalie Lucas Hernandez in the net, the team has a rock-solid defense that it hopes will serve as a solid foundation for growth this year.

“I’m pretty good on defense and we got a solid tender,” Owen Grainger said. “We’re just trying to make guys better, improve on the team and hopefully we can get a win this season.”

Recruiting for ice hockey is a challenge in Northern Virginia, an area not known for an entrenched hockey culture, Mike Grainger said. Between the J.V. and varsity teams, the coaches have found just about every player who’s interested in, or skilled at, ice hockey in the school.

“It’s a huge school, but basically any kid that can skate or play hockey at any level is on the team at J.V. or varsity,” Mike Grainger said. “We do not have a lot of depth. Our roster this year is a little smaller.”

A small pool of players isn’t the only challenge Mike Grainger and the coaches had to contend with before the season opener. A total lack of funding from the school or school board remains a serious issue for the team.

The team didn’t have a preseason and doesn’t practice because resources are so scarce. Team practices aren’t only good for building skills; they’re necessary to build team bonding and chemistry. But it hasn’t been hard for the Titans to adapt.

Almost every player plays on a club team. Some, like Owen Grainger, play at the highest level, but the team has representation from every level of club play, from house leagues to tier one. Outside of T.C., most players are already practicing three times a week and playing two games with their club teams. 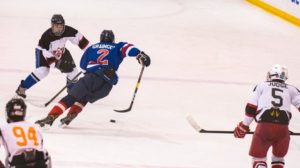 “We don’t practice, and we don’t have the money to practice, but we don’t really feel that we want to add another day of practice to these kids and their schedules,” Mike Grainger said.

Some of the players are on the same club teams and have been friends for years inside and outside of the high school. The bonds that would normally be forged between players during practice are already there to a certain extent, Owen Grainger said.

The total lack of funding means the coaches and ice hockey booster club, run by parents Michael and Heather Planey, have to work harder to increase the team’s visibility in the community.

Through social media promotion, an old-fashioned flyer campaign and a record of success on the ice, the team has been steadily gaining traction in the high school.

“People are getting into it when they realize we have a team, and we don’t just have a team, we’re a pretty good team,” Mike Grainger said.

Like T.C. Williams’ football team, the Titans will also be playing a few games at The St. James, an indoor sports complex in Springfield, instead of at the Prince William Ice Center in Woodbridge. The hope is The St. James’ relative proximity to T.C. Williams will bring out more fans to the team’s games.

“Prince William, it’s a pretty far drive for most of the guys and last season we only had one game where a big crowd came out and really supported,” Owen Grainger said. “It really helps having a crowd there.”

With a tight but skilled roster and goal scoring arsenal, the Titans are ready to make an impression this season, not only on T.C. Williams but opponents like West Potomac High School and CSHL newcomer – and newly minted rival – Bishop Ireton High School.

“It’s a team that the school can be proud of and the city can be proud of,” Mike Grainger said. “We put together a championship-winning team a couple years ago and, even last year, we were the champions of the league. We want people to know that and come out and cheer us on.”